Written by zerophoid on 16th Apr 2018. Posted in Articles.

The Real Story behind the Toyota 4Y Industrial Engine 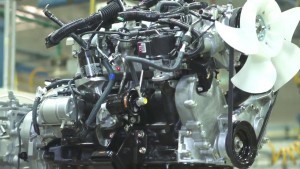 The 4Y motor is a Toyota designed and manufactured engine, exclusively for the Toyota forklift. It’s a very compact design, which benefits the customer by providing excellent air flow through the chassis and through the radiator to get the heat out of the forklift.

When inventor Sakichi Toyoda successfully pioneered the automatic loom, he laid the foundation for Toyota Industries and our commitment to kaizen, continuous improvement. For nearly a century, the Toyota name has been synonymous with excellence in quality and innovation with the inventor’s spirit at the heart of our business.

But I’m sure if you’re reading this blog you know that Toyota makes much more than cars. In 1956, Toyota began producing forklift engines, a new chapter in the story of Toyota Industries. As material handling needs evolved, so did Toyota’s role in the game. Heavy duty applications called for equipment tough and robust enough to take on high capacity needs. And at the core of these powerful workhorses needed to be an engine with the durability and grit to deliver reliable life and power.

In 1986, Toyota introduced a forklift engine that could take on these heavy duty challenges : The Toyota 4Y Industrial Engine. Carefully designed and engineered through the core practices of the Toyota Production system, this engine set a new standard of excellence within the material handling industry. Today, millions of these engines have been produced and can be found in forklifts, compressors, gas heat pumps, and more.